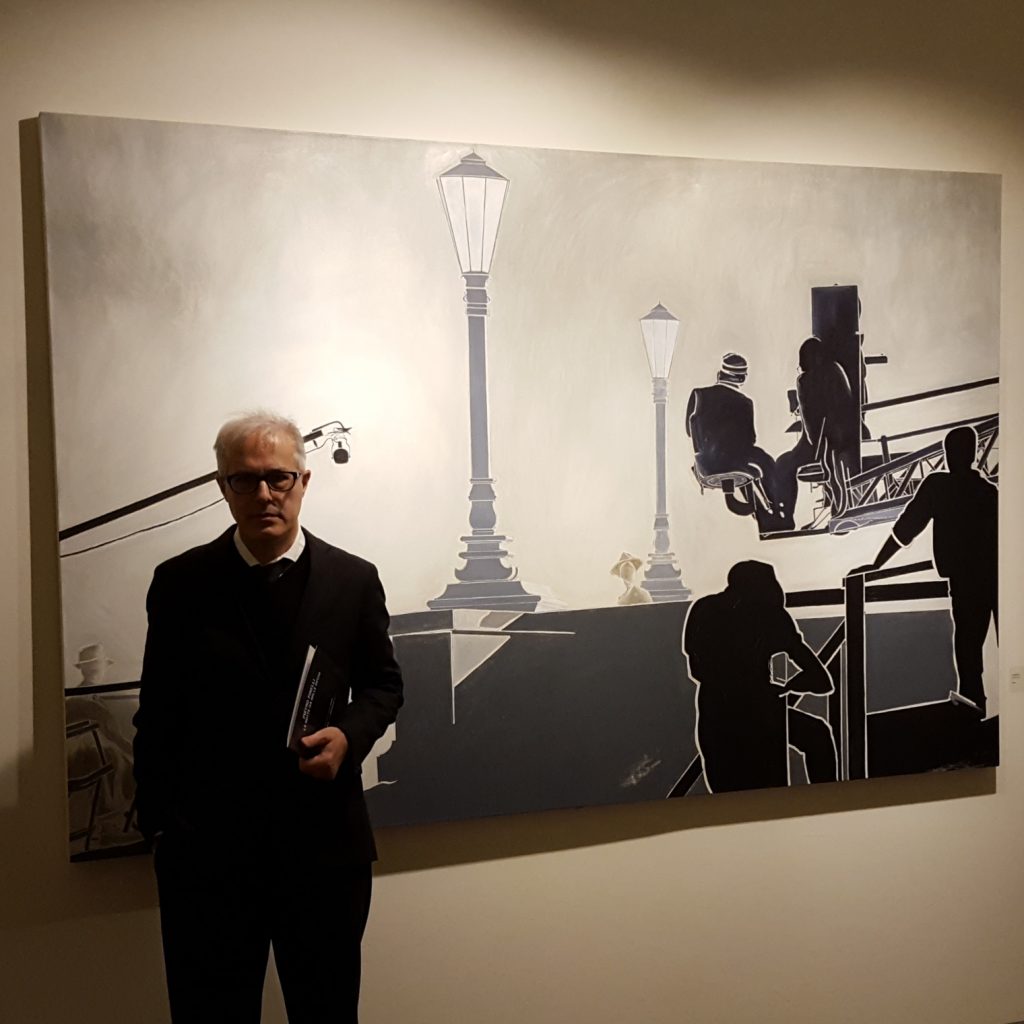 An ode to the cinema, Pietro Finelli’s Oeuvre is a contemporary masterpiece comprising fragments from movie scenes and film history. During his art study at the Benevento’s Art High School and Architecture at Naples University Pietro Finelli discovered his passion for cinema, particularly in the classic american genre of film production – the „Noir“ movie of the 1940s and 1950s. Since that time the paintings, pastels, and collages of Finelli have the cinematics as a main subject. His interest in cinematography is based on the cognitive-visual process that this expressive medium triggers off in a problematic dimension, precisely in the „noir“ movies.

The artist is fascinated and literally captured by an atypical manner to emphasize primerily on the vision and the visibility of the artwork than on the theme. Finelli translates the high-contrast black-and-white cinematography of a group of favorite scenes into large size paintings with an idiosyncratic vision in subtle hues, half incisive characterization, half cartoon. With a few strokes on the canvas, Pietro Finelli creates the dark atmosphere of the mysterious "noir" films of the 1940s and 1950s. Dark obsession, dark spaces, mysterious, nocturnal view of anonymous cities, light and shadow, people without faces – all these details reinforce the alienation effect. In Finelli`s paintings the darkness makes visible.

“Pietro Finelli is a narrator of stories built on fragments of existence whose motivation stems from the need of seeking a profound identity, an "inherent substratum" that powerfully brings the fullness of living back. Finelli’s art is an iconography of intuition, which combines different levels of expression and allows them to interact, and which repeatedly dissolves the boundaries between reality and illusion. In this way, the signifier is free to proceed in an unlimited sequence of meanings, which are linked together in a never-ending process. As affirmed by Benjamin, in this process the continuous enrichment of "experiential quality" is possible. “ Tiziana Conti (Curator)